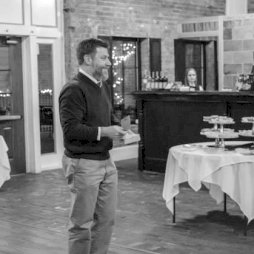 Add Its Voice to the Symphony

Episode #62 April. 15, 2016 31m 24s Download
In this episode: Joseph Darnell and Eric Rauch
This week on the show, Eric and I discuss ‘The South - Home of Many a Great Soft Drink Company’. We also talked about white vs. green tea and taste test Counter Culture Coffee’s specialty grade Justina Ramos Bolivian coffee. Also, we want to give a huge shout out to Condesa Coffee. Thanks for the great coffeehouse experience!

Listener David Biddex wrote in to make the following points in response to our comments regarding Pepsi in Episode 61:

While we’re talking about soft drinks, Eric shares a little about his favorite, Moxie, and Joe describes the soda his grandfather invented, Trumanade. The combination of Mountain Dew and whiskey reminded Eric that, back in the day, he drank shots of tequila with Wink Soda (a primarily grapefruit beverage). Pour some tequila, add some Wink, slam the glass on the table and the drink would transform into a tasty foam.

Moxie’s flavor profile is unusual compared to many other caramel-colored soft drinks in the United States. A little about the beverage from Wikipedia:

Moxie’s flavor is unique, as it is not as sweet as most modern soft drinks and is described by some as bitter. Moxie is flavored with gentian root extract, an extremely bitter substance which was reputed to possess medicinal properties. It originated around 1876 as a patent medicine called “Moxie Nerve Food”.

Eric agrees that it’s on the bitter side, and it’s refreshing to find a tasteful soda that’s light on sugar. Like many other small soft drink companies of its ilk in the U.S., Moxie doesn’t fight to keep up with the times; it feels like a product of another era that survives today.

Joe’s grandparents on his mother’s side were from North Carolina. Each visit to Greensboro, Joe and his siblings would enjoy Cheerwine. Oddly, this beverage wasn’t sold outside of the Carolinas till recent years. Along with expanding the company, the original recipe was updated with high fructose corn syrup in the place of regular white sugar. Joe is very partial to the sugar-flavored type, which can still be found in glass bottles.

Trumanade is the now the all but forgotten concoction Joe’s grandfather made. Once upon a time, Truman Darnell came into possession of lots of sugar for some work he’d done (instead of cash, sugar was exchanged for his labor). Truman used the sugar to create Trumanade, a lemonade-inspired carbonated beverage. When the sugar was all gone the beverage was discontinued.

No one in the family saved a sample of the product, but family recalls that it was quite good. About 1,000-2,000 bottles were made and sold in Georgia.

Thanks to connections in the meatspace, Eric and his wife took a tour of Connie’s Zen Tea facility. Much like the world of coffee, craft tea is a delight for enthusiasts to explore. There’s literally hundreds of flavors to brew from because just a few leaves are processed countless ways to yield different flavors.

Eric discovered that he enjoys white tea a little more than green tea. Between the two, white tea tastes less like grass.

In his home brewing routine, Eric makes space between cups of coffee to have a tea with his wife in the evening. Tea’s caffeine levels can be as significant as coffee’s, but another element of tea produces a calming effect that counter balances the energy boost.

eZenTea.com is the online home of Connie’s tea house that Eric toured. Check them out. If you order from their selection, please let them know that we sent you.

Another tea company Joe is familiar with is Teavana, a franchise of tea shops often found in shopping malls across America. They’re pricey, but if you want a tea beverage to go, they’re drinks are comparable to Starbucks’ specialty prices. Go in and ask a specialists to introduce you to their selections, and be sure to enjoy the free aroma. You’ll thank us later!

When in downtown near Georgia Tech, be sure to stop and enjoy the Condesa Coffee shop. Joe was in town for a conference at the Loudermilk Center a block away from the coffee house. It was well-worth the coffee run to get Joe and his friends freshly roasted/brewed pour-over, drip and hot chocolate beverages.

One of the best things that money can buy at a specialty coffee shop is a bag of freshly roasted beans. Condesa takes advantage of the local Counter Culture Coffee company (CCC), a wholesale business that roasts and ships from Atlanta. We’ve mentioned before that we’re super fans of CCC, so Joe was quick to buy whatever beans CCC stocks at Condesa. On April 13, he purchased a 12 oz. box of Justina Ramos, a Bolivian single-farmer lot. It was roasted April 11.

Eric and I agree that the Counter Culture Coffee Justina Ramos’ packaging stands out. The beans come inside a clear valve-breathing plastic bag inside of a simple cardboard box. The box gives the product a lot of its character. Eric noted that on the shelf it looks like a small box of cereal.

But it doesn’t have the tacky branding and marketing design of your average box of Kellogg’s. The Justina Ramos’ packaging is so good, in fact, that I (Joe) could imagine why some coffee enthusiasts would like to collect Counter Culture boxes for display. Justina Ramos’ is colorful. It sports a blue top, red and mediterranean blue label that wraps the front and right side, an elegant off-white background pattern covering four sides, the logo cleverly mirrored on the back, red on the interior… If you don’t have an air-sealed container for your beans, this package will at least look fabulous with the rest of your coffee gear.

Counter Culture’s cupping notes on the box for the Justina Ramos:

Justina Ramos continues to produce one of our best Bolivian coffees on her nearly 6-hectare farm growing primarily Typica variety plants. A member of the Cenaproc cooperative in the community of Nueva Liusta, Ramos meticulously manages production—from the picking of coffee cherries to the creation of this spectacular lot. We’re fortunate to share Justina’s coffee again and celebrate our continued partnership. Look for flavors of pear, green apple, and almond.
Variety: Typica & Catura
Elevation: 1,720 meters
Post-harvest process: Fermented for 18-22 hours and then washed
Drying: Dried on raised beds
Harvest time: June-October 2015

I noticed that Justina Ramos tastes a little better as a pour-over in a Kalita Wave than as an inverted AeroPress brew. Eric doesn’t pick up the pear flavor, but he did catch green apple and butterscotch-like sweetness throughout his cup.

We give Counter Culture’s Justina Ramos a hearty thumbs up.